A Holiday Season to Remember

Some parties took advantage of TapSnap’s beautiful green screen backgrounds that can be digitally inserted into a picture – everything from a gorgeous Christmas tree scene, sparking lights and a winter hearth – while others used their event setting as a backdrop.

“The digital props were the biggest hit, especially the holiday ones this time of year, and the Hollywood ones like Angelina and Brad,” says TapSnap franchisee Chuck Reed, who did the corporate party for Yum! Brands (Kentucky Fried Chicken, Pizza Hut and Taco Bell) at a country club near Arlington, Kentucky.

“A few people even called me after the event asking if I could do some modifications and add some digital props for them,” says Chuck (TapSnap 1052). In the holiday spirit, he obliged.

Other highlights of Chuck’s holiday season included corporate parties at one of Indianapolis’ finest entertainment venues, Latitude 39, a bar and entertainment complex with live entertainment, dancing, video games, bowling and much more. There he entertained  600 employees of the financial services company Sallie Mae, and 300 employees of Zotec Partners, makers of medical billing solutions.

Shopping mall Santas, the Coors Field and other festive fun in Colorado 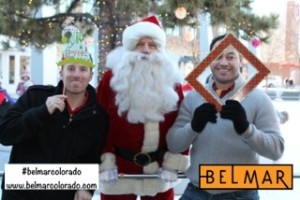 Near Denver, franchisee Tyler Kidd (TapSnap 1025) braved freezing cold weather with his TapSnap machine to photograph shoppers skating with Santa at the Belmar Shopping District in Lakewood, Colorado. He was there for three Saturdays in a row, and on the first Saturday the thermometer plunged to 5 degrees Fahrenheit, but it wasn’t a bust.

“We set up the tent. We brought some heaters. And everything worked. The turnout was actually pretty good,” he says.

All the pictures were uploaded to the Belmar Shopping District Facebook page.

“The kids and the families were skating around and Santa was there and we were taking pictures of everyone. A lot of people said they plan to use their TapSnap picture as their Christmas card photo,” says Tyler.

Tyler also got to party at the famous Coors Field, home of the Colorado Rockies Major League Baseball Team. The corporate holiday party for 150 employees of the Hannover Life Reassurance Company of America took place at an inside venue at the Field.

“It snowed a foot the day before, and the baseball field was covered in snow which just looked beautiful from our view in the stands,” says Tyler.

He also did a party for the Denver Metro Chamber of Commerce, complete with three singing Mrs. Clauses.

Lighting up Dallas, The Container Store Party and more 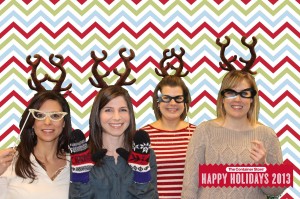 In Dallas, TapSnap was there for City Lights with See’s Candies, when they turn on the downtown area’s Christmas lights.

“There was the illumination of the iconic Dallas Christmas tree,” says Jose Areizaga, Operations Manager for TapSnap 1015. “They unveiled the Neiman Marcus store windows and lit up downtown Dallas.”

Naturally there were some great pictures of people enjoying lollipops and other treats from See’s Candies.

They also provided TapSnap services to Texas Christian University’s Carol of Lights, where more than 25,000 holiday lights are turned on outside 13 buildings around the University’s Memorial Circle. 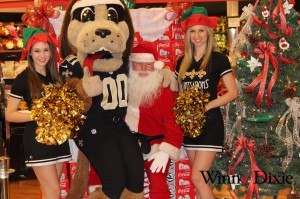 Then there were corporate holiday parties small and large, including The Container Store staff party in Dallas and two parties for the Winn-Dixie grocery chain, one celebrating the store’s reopening in Gretna, LA, and the other a community holiday party in Destrehan, LA just outside New Orleans. There, TapSnap captured Santa Claus moments with kids of all ages.